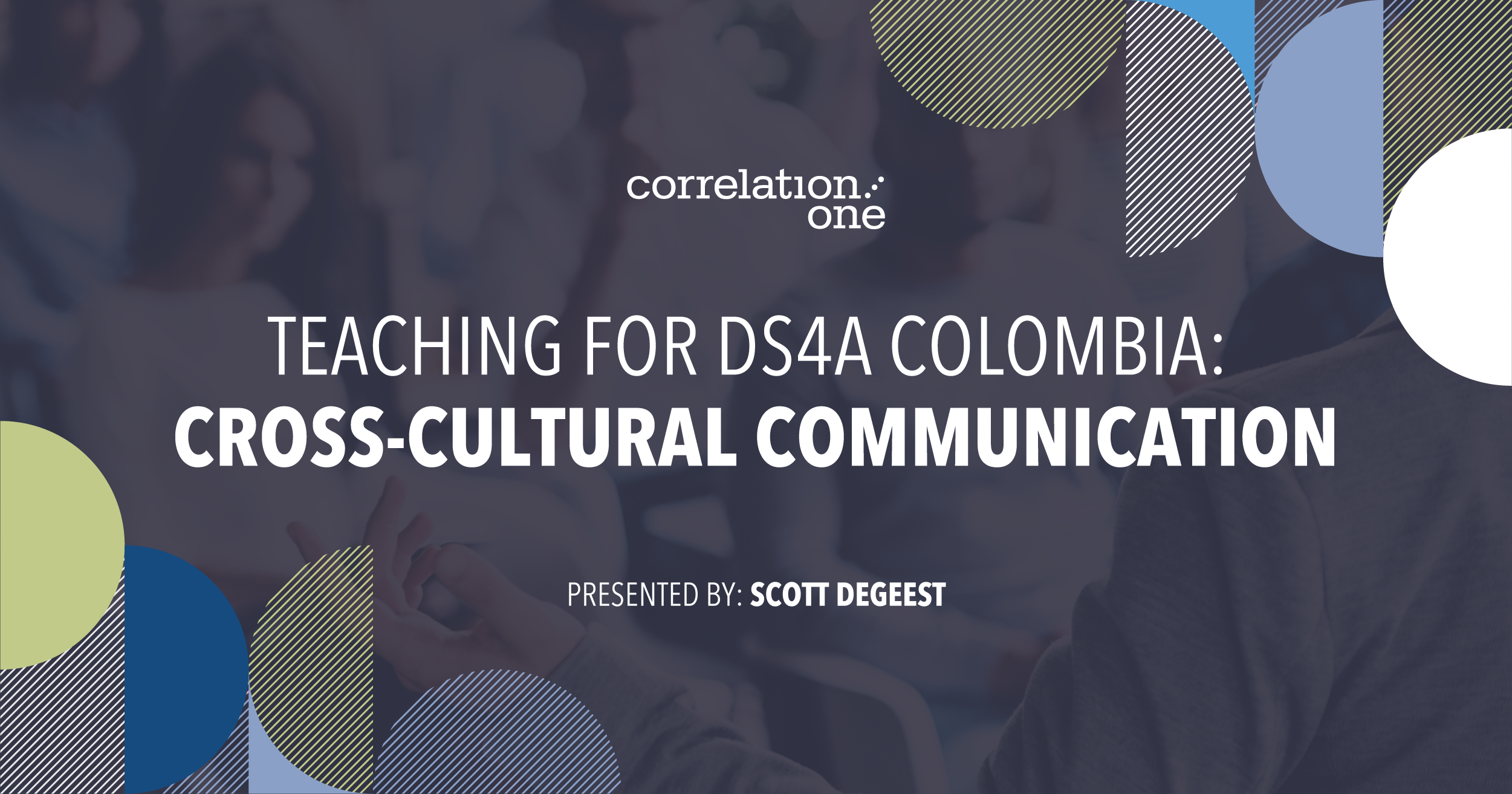 Over the summer of 2022, the team at Correlation One offered me an opportunity to teach as an instructor for several sessions of the Data Science for All / Colombia program. Over several months, I led roughly five sessions covering topics on data visualization, web scraping, logistic regression, cross-validation, and computational neural networks.

I was eager to take up the opportunity. As part of developing and maintaining my skills as a data scientist, I wanted to find a way to challenge myself to recontextualize my knowledge. One way to do so is through connecting with people whose cultural values, norms, and experiences differ from one’s own. In addition, though I taught in English, most of the fellows were not native speakers, so I had to consider carefully how I framed the language I used to be effective. My teaching experience with our Colombian students was a delight, so I share some takeaways from that experience below.

Takeaway One: Metaphors and Idioms

First, I will make a paradoxical point about metaphors: I don’t use them at all, but also absolutely use them. More clearly,  I am thinking about metaphors in two ways. One is that native speakers of a language often use metaphors in the form of idiomatic expressions. In English, some idioms that seem to come up all the time are sports idioms. For example, both “hitting a home run” and “knocking it out of the park” mean “doing a job very well,” and both are idioms that relate to baseball. Expressions such as these have inherent value by adding color and context to a language. However, when communicating about a complex topic like data science, I steer clear of such idiomatic expressions.

In contrast, a situation-specific metaphor can be a powerful teaching tool. During my discussion about data visualization, I purposefully gave the fellows a confusing visualization that was deeply weird-looking. I then asked the fellows to describe what they thought the image resembled. The more imaginative answers included “deformed zebra” and “can hippos be spotted?” But the one that stuck with me was a fellow who reacted “what an ugly, ugly elephant!” For the remaining time in class, we talked about the ugly elephant and how to avoid it. I believe that using the phrase repeatedly in the session helped the fellows connect with the material. It was something unique and striking that would help them recall the message of that lesson as they continued their session.

Also, I quite enjoy talking about elephants.

Takeaway Two: Having Fun with Language

As an example of this takeaway, one of the most challenging lessons I taught for the fellows was a session on logistic regression. I told a colleague who is a professor of computer science that I was leading a session teaching logistic regression. He joked to me, “the hardest part of teaching logistic regression is making sure that for every wrong thing you say, you say another equally but oppositely wrong thing.” I laughed and understood his point. The material is tricky. So as I prepared for what I knew would be a challenging lesson, I tried to think of ways that we could have fun with the material.

One of the things that I enjoy is learning about words and phrases and terms in other languages. So one thing I like to do when teaching in an EFL context is to ask fellows during the session how they would translate certain words or phrases. This tactic has a couple of unique advantages. One advantage is that this action displays a sincere interest in the context and language of the audience. People generally like it and appreciate it when someone expresses genuine interest in a language they value. Another advantage is that this activity helps control the tempo and flow of the class. Finally, this tactic encourages the fellows to engage critically with the material I am presenting in their language. Any tactic that allows learners to stop and think adds value by facilitating processing and making the course content stickier.

In this particular session, we discussed the translation of the word for “tricky” in Spanish, as we need to be tricky (“mañoso” or “astuto”) to navigate the tricky (“tramposo” or “complicado”) concepts of logistic regression. Another part of the discussion we had that was fascinating to me was our discussion of the word odds and odds ratio. This concept – which is critical to logistic regression! – has a number of different translations [See this article: https://bit.ly/oddsratioesp]. The follow up the TAs and I did after the first class on the complex issues around translating this term helped us address questions and confusion the fellows had about logistic regression in subsequent sessions.

Note: I wrote about the more technical details of the session here [https://bit.ly/ds4alogit].

One theoretical framework I think about when I teach in a virtual environment is media richness theory. A core idea from this framework is that rich media, or media with a lot of different modes of expression (text, audio, images, and video) enables people to better explain, discuss, and process complex concepts or ideas. A more detailed explanation of theory is here [https://bit.ly/ds4amrt]. So when I think about teaching data science concepts, I try to increase media richness in order to facilitate people's learning. As part of this framework, I also like to note that lean media is effective communication when communicating an idea directly without much nuance.

When I was teaching in the DS4A Colombia program, I tried to make sure that there were always several flows of information happening across text, audio, visual, and image inputs. If a learner struggles with a complex idea, they have options to switch media modes to process the information in a different manner.

One session in which this tactic became critical was during the session on computational neural networks. The core ideas for neural nets – transforming data into feature vectors and feeding those vectors into nodes to produce prediction outputs – are complex. So in addition to the core teaching material, the visuals I provided, and reading some of the text out loud so that students could process, many of the students also opted to translate parts of what I was saying into Spanish and also to find and share infographics and images they found helpful to conceptualize the complexity of how a neural network’s nodes function.

In these cases, our goals were to create multiple ways to frame and reiterate the core ideas for neural networks in a variety of different ways. Repetition across these different forms of media created resonance. By the end of the session, the repetition of the ideas in different forms with different modes of media empowered the fellows to clearly understand the ideas and be able to describe what was happening in their own words.

The big three takeaways from my experience were :

Enjoy and play with language and translation

The next session of DS4A/Colombia is now accepting applications. For those interested visit the main site here.  I am looking forward to participating and being involved with these cohorts of emerging data professionals.